In most of the SAS programmes we use Binaural Frequency Differentials (BFD), which aim to gently guide our naturally occurring brainwaves in a certain direction, either up or down, faster or slower. 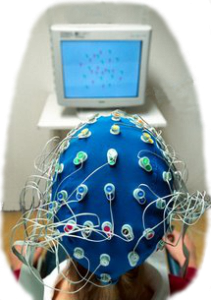 Standard EEG test[/caption]Electroencephalography (EEG) is the recording of electrical activity under the scalp. EEG measures voltage changes resulting from current flows within the neurons of the brain. In clinical contexts, EEG refers to the recording of the brain's spontaneous electrical activity over a short period of time, usually 20–40 minutes, as recorded from multiple electrodes placed on the scalp.

A short history of EEG measurements: Richard Caton (1842–1926), a physician practising in Liverpool, presented his findings about electrical phenomena of the exposed cerebral hemispheres of rabbits and monkeys in the British Medical Journal in 1875. In 1890, Polish physiologist Adolf Beck published an investigation of spontaneous electrical activity of the brain of rabbits and dogs that included rhythmic oscillations altered by light. In 1912, Russian physiologist, Vladimir Vladimirovich Pravdich-Neminsky published the first animal EEG and the evoked potential of a dog. In 1914, Napoleon Cybulski and Jelenska-Macieszyna photographed EEG-recordings of experimentally induced seizures. German physiologist and psychiatrist Hans Berger (1873–1941) recorded the first human EEG in 1924. Expanding on work previously conducted on animals by Richard Caton and others, Berger also invented the electroencephalogram (giving the device its name), an invention described "as one of the most surprising, remarkable, and momentous developments in the history of clinical neurology". His discoveries were first confirmed by British scientists Edgar Douglas Adrian and B.H.C. Matthews in 1934 and developed by them.

Brainwaves can be measured with EEG equipment. The following brainwave bands have been identified

The SAS Binaural Frequency Differentials are based on "Binaural Beats" and this is the hum you can hear in the background of most of the SAS programmes.

A short history of Binaural Beats: They were first discovered in 1839 by H. Dove, a German experimenter. Binaural beats are perceived by presenting two different tones at slightly different frequencies separately into each ear. The effect is produced in the brain and not in the ears. It is produced by the neural output from the ears and created within the olivary body within the brain, in its attempt to "locate" the direction of the sound based on phase.